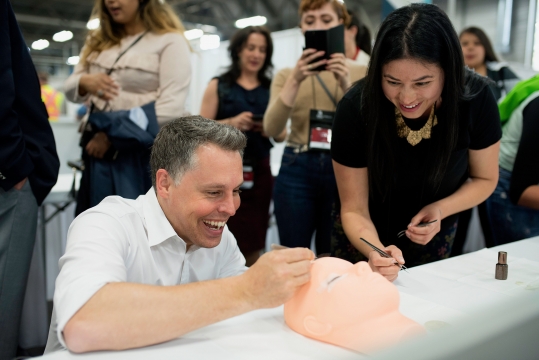 The Parliamentary Secretary to the Prime Minister (Youth), and Member of Parliament for Vaudreuil—Soulanges, Peter Schiefke, participated in a Try-A-Trade® and Technology activity at the Aesthetics Skill Area during the 2018 Skills Canada National Competition, in Edmonton.

Edmonton, Alberta, June 5th, 2018 – Yesterday, the Parliamentary Secretary to the Prime Minister (Youth), and Member of Parliament for Vaudreuil—Soulanges, Peter Schiefke, toured the Skills Canada National Competition (SCNC) at the Expo Centre in Edmonton, and engaged with a variety of skilled trades and technology youth leaders from across the country.

Before a crowd of 1,800 youth competitors, teachers and industry leaders at the SCNC Opening Ceremonies Sunday evening, Mr. Schiefke stressed the important relationship between the Government of Canada and Skills / Compétences Canada, and praised the competitors’ hard work and dedication.

“I’m thrilled to be here at the Skills Canada National Competition in Edmonton on behalf of the Government of Canada,” said Parliamentary Secretary Schiefke.

“I am impressed by each and every one of you, competing not just to represent your respective provinces and territories, but to become the best and brightest of Canada’s future workforce. Through your involvement with Skills / Compétences Canada, you are already building communities from coast to coast to coast, and contributing to creating a more prosperous Canada,” said Schiefke.

Along the way, Mr. Schiefke took part in Try-a-Trade® and Technology activities which were related to a mixed reality experience with UA Canada, a Volvo Construction interactive activity, and many more. There are over 50 Try-a-Trade® and Technology activities available to visiting students and the public at SCNC, each simulating a different skilled trade or technology.

Mr. Schiefke also met with a group of young professionals who participated at SCNC in the past, and who are now working in the field in which they competed. These skilled trades and technology youth leaders shed light on the current challenges and opportunities which exist in their respective sectors.

“My involvement with Skills / Compétences Canada and as a member of WorldSkills Team Canada in IT Software Solutions for Business changed my life in many positive ways,” says Stacy DuBois, who now works as a Business Intelligence Developer in Ottawa. “It’s important for us SCNC alumni to be able to engage directly with elected officials like Mr. Schiefke to convey input on our journey and the status of skilled trades and technology fields.”

The Closing Ceremonies, where the medalists in each category are announced, will be held tomorrow at noon at the Edmonton Expo Centre. Results will promptly be posted on the Skills / Compétences Canada website.

About Skills/Compétences Canada
Skills/Compétences Canada was founded in 1989 as a national, not‐for‐profit organization that works with employers, educators, labour groups and governments to promote skilled trades and technology careers among Canadian youth. For information on Skills Canada’s programs and competitions visit www.skillscanada.com. For more information about SCNC visit: www.skillscompetencescanada.com/en/programs/skills-canada-national-competition.