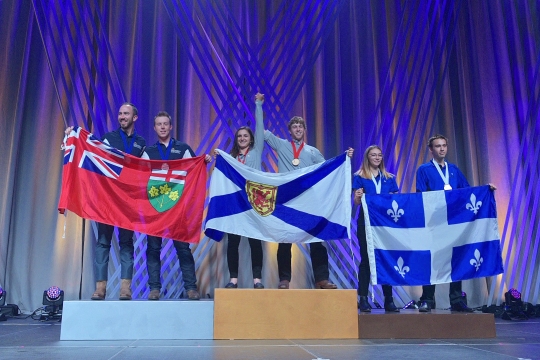 Over the past week, 550 of the most talented students and apprentices from across the country were tried, tested and judged while competing at the Edmonton EXPO Centre. The complete list of medalists is available on the Skills Canada Website.

Over 200 medals were awarded to the top industry champions in six skilled trade and technology sectors, including: transportation, construction, manufacturing and engineering, information technology, service and employment. The competitors were evaluated based on strict industry standards.

During SCNC, approximately 6,000 student visitors, industry leaders and several industry celebrities were in attendance to take part in some of the onsite activities such as the Essential Skills Stage and the over 50 Try-A-Trade® and Technology activities.

The purpose of SCNC is to engage Canadian youth and promote all of the exciting careers that are available to them in the skilled trades and technologies. It is the only national multi-trade and technology event of its kind for young students and apprentices in the country.

“Having technologically driven skills and digital literacy skills is becoming increasingly important for careers in these sectors, and through SCNC we are able to raise awareness of these evolving occupations”, said Shaun Thorson, Chief Executive Officer of Skills/Compétences Canada.

The 2019 Skills Canada National Competition will be held at the Halifax Exhibition Centre, in Halifax, Nova Scotia, May 28 – 29.

PHOTOGRAPHY and VIDEO
View the Skills Canada Flickr page to access and upload hundreds of high resolution pictures of competitors in action.
View the highlights video of SCNC 2018.