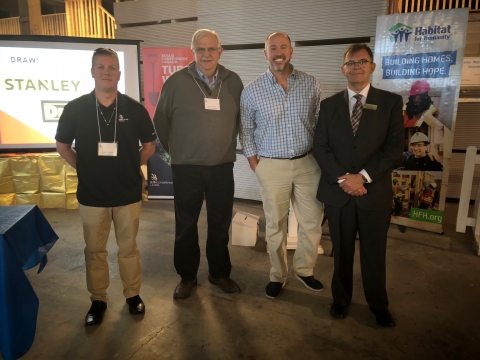 Ottawa, ON, May 1, 2018 – Skills/Compétences Canada (SCC) is proud to launch its Landscape Gardening mini-series – Skills Canada Turf Wars, featuring Carson Arthur, international landscape designer and HGTV celebrity. This mini-series was created to highlight the incredible career opportunities available in the skilled trades and technologies in Canada, with a special focus on landscape gardening, innovation, technology and its implementation in today’s world.

During the official program, guests had the opportunity to view the video trailer of this mini-series as well as highlights of each of the five episodes. This mini-series was filmed on location at the 2017 Skills Canada National Competition (SCNC), in Winnipeg, Manitoba, and it focuses on Landscape Gardening, one of the 44 recognized Skill Areas at SCNC. Skills Canada Turf Warsdemonstrates the skills, innovation and planning that goes into completing a complex landscape project, by a team of two people, in less than 12 hours. Many of the Essential Skills that are required for a career in landscape gardening were also highlighted including: numeracy, document use, oral communication and working with others. Following the official program, guests from industry, education and labour were invited to participate in a tour of Habitat for Humanity’s Edmonton Fabrication Shop.

“Developing technical and digital literacy skills for careers in the skilled trades and technologies is becoming increasingly important for our country to remain competitive in the global marketplace. One of the goals of this mini-series is to demonstrate the vast array of skills that are required to be successful in the ever-evolving Landscape Gardening industry; one of the many lucrative career pathways available to Canadian youth”, said Shaun Thorson, Chief Executive Officer of Skills/Compétences Canada.
Skills/Compétences Canada also took the opportunity to announce that the 2018 Skills Canada National Competition will be hosted in Edmonton, Alberta, on June 4 and 5, 2018 at the Edmonton EXPO Centre.
Watch the Skills Canada social media channels to find out when and where a full version of the Landscape Gardening Mini-Series – Skills Canada Turf Warswill be available.

Skills Canada was founded in 1989 as a national, not-for-profit organization with partner Skills Canada organizations in each of the provinces/territories that work with employers, educators, labour groups and governments to promote skilled trades and technology careers among Canadian youth. Its unique position among private and public sector partners enables it to work toward securing Canada’s future skilled labour needs while helping young people discover rewarding careers. Skills Canada offers experiential learning opportunities including skilled trades and technology competitions for hundreds of thousands of young Canadians through regional, provincial/territorial, national and international events, as well as skilled trades awareness programs. Headquartered in Ottawa, Ontario, Skills Canada is the Canadian Member organization of WorldSkills. For more information, visit www.skillscanada.comor call 877-754-5226.

SCC Welcomes UA Canada as a Premier Sponsor of SCNC 2012