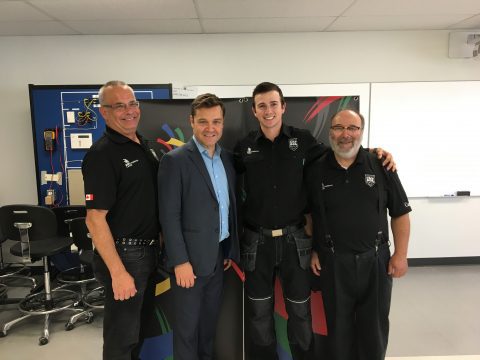 “I’m so proud to be on WorldSkills Team Canada 2017 and be able to explain to Mr. Jeneroux today the amazing impact the Skills/Compétences Canada programs have had on me, personally, and in terms of my career, said Ryley LaFrance.

LaFrance, 20, was the gold medalist in Industrial Control at the 2016 Skills Canada National Competition in Moncton and was educated at the Northern Alberta Institute of Technology (NAIT). Ryley is currently a Journeyman Electrician working for Independent Electric Controls in Edmonton.

“It was a pleasure to meet Riley, and hear about his journey competing in skills competitions in Industrial Control,” said Member of Parliament Matt Jeneroux.  “Riley’s hard work and passion for what he does is truly inspiring. I cannot wait to see what he accomplishes next, and wish him all the best as he travels to Abu Dhabi to represent our community and country on the world stage.”

WorldSkills Team Canada 2017 is made up of 31 outstanding young women and men from across Canada – 9 of whom are from Alberta. To qualify, each member successfully competed through a rigorous selection process.

WorldSkills Abu Dhabi 2017 will be the first competition to be held in the Middle East. In parallel to the Competition, WorldSkills holds one of the most prominent Conferences in the sector. National ministers of education, skills, industry and business have been invited from all the WorldSkills member countries and regions. They will tackle pressing issues in this sector – global youth unemployment, the mismatch between skills and jobs, and the mobility of skills qualifications.