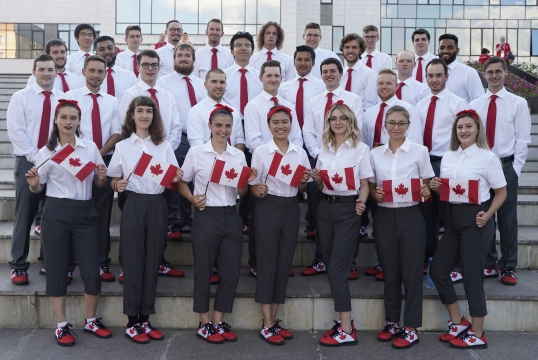 Ottawa, ON – August 27, 2019 – Skills/Compétences Canada, a national not-for-profit organization that actively promotes careers in skilled trades and technologies, today announced that WorldSkills Team Canada 2019 has been awarded with 1 Medal and  14 Medallions of Excellence at WorldSkills Kazan 2019. Canada’s Best of Nation Award was presented to Jack Dupuis from Val-Alain, Que. for his performance in Heavy Vehicle Maintenance. The complete list of the medals and recognition awarded to WorldSkills Team Canada 2019 for their performance at the 45th WorldSkills Competition is provided below.

“We are very proud of the members of WorldSkills Team Canada 2019 for their dedication, hard work and passion which has culminated in their participation in the 45th WorldSkills Competition. These young talented individuals represent our future skilled trade and technology workforce.  We know the skills and experience they have acquired through this event and its preparatory activities has positioned them well to thrive in Canada’s job market”, said Shaun Thorson, Chief Executive Officer, Skills/Compétences Canada.

This was Canada’s 15th participation in a WorldSkills Competition. WorldSkills Team Canada 2019 was comprised of 32 young skills champions from across the country, made up of 25 males and seven females, ranging in age from 18 to 24. This talented group participated in 29 of the 56 Skill Areas relating to the following six sectors: Construction and Building Technology, Creative Arts and Fashion, Information and Communication Technology, Manufacturing and Engineering Technology, Social and Personal Services and Transportation and Logistics. To read their biographies and follow their journeys, go to skillscompetencescanada.com.

The WorldSkills Competition, held every two years, is the largest vocational, education and skills excellence event in the world that truly reflects global industry standards. WorldSkills Kazan 2019 took place August 22 – 27 at the Kazan EXPO International Exhibition Centre and welcomed approximately 250,000 visitors. The event included more than 1,300 competitors from over 60 Member countries and regions from around the globe.

Events of this kind represent a great way to promote and develop the skills needed for the many important careers that are available within the skilled trades and technologies. Careers in these industries continue to be in high demand in Canada and around the world. According to a recent report published by Statistics Canada, in the first quarter of 2019 there was a 14% increase or 60,170 job vacancies in Red Seal trades alone compared to last year. The Red Seal Program is a national standard of excellence and is now recognized by employers as an indication that a journeyperson has met a common standard of knowledge and experience in their trade.

The next WorldSkills Competition is scheduled to take place September 22 to 27, 2021 in Shanghai, China.

Skills/Compétences Canada was founded in 1989 as a national, not‐for‐profit organization that works with employers, educators, labour groups and governments to promote skilled trades and technology careers among Canadian youth. Click here for more information on the 45th WorldSkills Competition.

Photo: There is a photo associated with this release.

Note to editors: Additional high-resolution photography is available on request.