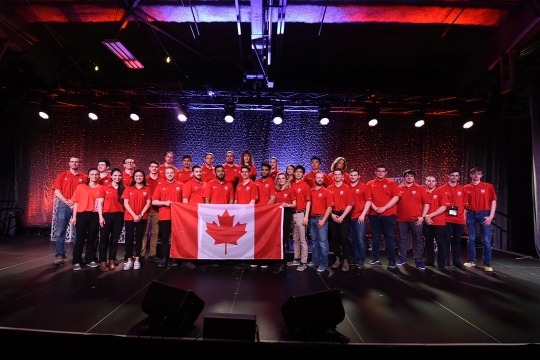 WorldSkills Team Canada 2019 members are announced at the Closing Ceremony of the 2019 Skills Canada National Competition, in
Halifax, Nova Scotia.

HALIFAX, Nova Scotia, May 30, 2019 – Today, Skills/Compétences Canada announced the official members of WorldSkills Team Canada 2019 who will go on to compete on the international stage at WorldSkills Kazan 2019, this August. The list of official members is available on the Skills Canada Website.

At the 2018 Skills Canada National Competition (SCNC), which was a qualifying year for the WorldSkills Competition, the two highest ranking age eligible participants in 29 identified Skill Areas were selected to participate in the next stage of the WorldSkills Selection Process. These WorldSkills Team Canada Prospects participated in various training and mental preparation programs, with the help of a trainer and expert, between September and May of 2018.

“We are very proud of the hard work and dedication that Team Canada has demonstrated. We wish them the best of luck at WorldSkills Kazan 2019 where they will be competing for the title of international champion. The WorldSkills Competition is a great opportunity for competitors to test their skills against the best in the world and to showcase their talent,” said Shaun Thorson, Chief Executive Officer, Skills/Compétences Canada.

Follow WorldSkills Team Canada’s journey on the Skills Canada Website at www.skillscanada.com and on our social media platforms #WSTC2019.

About Skills/Compétences Canada
Skills/Compétences Canada was founded in 1989 as a national, not‐for‐profit organization that works with employers, educators, labour groups and governments to promote skilled trades and technology careers among Canadian youth. www.skillscanada.com. For more information about the 45th WorldSkills Competition visit: www.skillscompetencescanada.com.