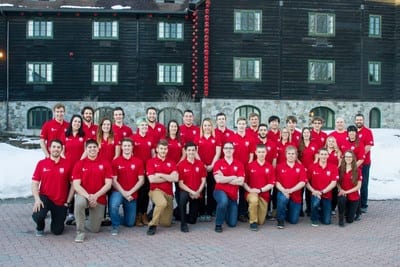 OTTAWA, March 28, 2017 /CNW/ – The 31 official members of WorldSkills Team Canada 2017 recently gathered at the Fairmont Château Montebello, in Montebello, Québec to participate in team-building activities and mental preparation exercises as part of their training for WorldSkills Abu Dhabi 2017.

The WorldSkills Competition, held every two years, is the biggest vocational education and skills excellence event in the world that truly reflects global industry standards. This event will host 60 WorldSkills Member countries and regions, over 1,000 experts, and approximately 100,000 spectators including educational, government and industry leaders. The competition represents the pinnacle of excellence in skilled trades and technology.

The WorldSkills Team Canada 2017 competitors represent several regions across Canada, and were the top medalists at the 2016 Skills Canada National Competition (SCNC) held in Moncton, New Brunswick. Following SCNC, they completed their final qualification during the WorldSkills Canadian Trials, meeting pre-established Canadian standards in their respective sectors. At WorldSkills Abu Dhabi 2017, they will compete with more than 1,300 competitors for a chance to be named world champion.

Skills/Compétences Canada (SCC) would like to congratulate these competitors and wish them well at WorldSkills Abu Dhabi 2017: “The WorldSkills Team Canada 2017 competitors are the most talented youth in this country in the skilled trade and technology sectors,” says Shaun Thorson, CEO of SCC. “They are tomorrow’s workforce and will contribute to Canada’s vibrant economy, ensuring its future prosperity in the global job market.”

About Skills Canada
Skills Canada was founded in 1989 as a national, not for profit organization that works with employers, educators, labour groups and governments to promote skilled trade and technology careers among Canadian youth. Its unique position among private and public sector partners enables it to work toward securing Canada’s future skilled labour needs while helping young people discover rewarding careers. Skills Canada offers experiential learning opportunities including skilled trades and technology competitions for hundreds of thousands of young Canadians through regional, provincial/territorial, national and international events, as well as skilled trades awareness programs. Headquartered in Ottawa, Ontario, Skills Canada is the Canadian Member organization of WorldSkills. For more information, visit www.skillscanada.com or call 877-754-5226.

Feature: Machinist Elizabeth Moses, One of Canada’s Most Powerful Women

Set for life with the new Skills for Success