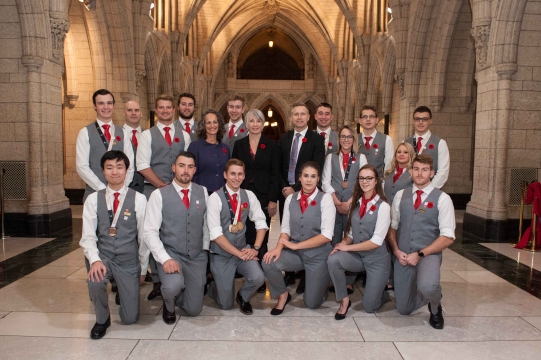 Ottawa, ON, November 9, 2017– Yesterday, members of WorldSkills Team Canada 2017 visited Parliament Hill in celebration of their return from competiting at WorldSkills Abu Dhabi 2017, and to highlight National Skilled Trades and Technology Week (NSTTW).

WorldSkills Team Canada 2017 includes 31 members, all between the ages of 17 and 25, who represent Canada’s most skilled youth in a variety of skilled trades and technology contest areas, such as Car Painting, Web Design and Development, Cooking, Mobile Robotics, Cabinetmaking, Fashion Technology, Aircraft Maintenance, and dozens more.

Among those who traveled to Ottawa this week are WorldSKills Abu Dhabi 2017 bronze medalists in Mechatronics Theodor Willert and Avery Bird. WorldSkills Team Canada 2017 also included 13 Medallion of Excellence recipients, who received an above average international score in their respective skill areas.

“Being a member of WorldSkills Team Canada 2017 was an amazing opportunity that changed my life,” said Kyla Henry from Regina, SK, who earned a Medallion of Excellence in Graphic Design Technology. “Through my incredible experience, I hope to encourage other young Canadians to pursue a career in the skilled trades and technology sectors. There are so many opportunities.”

While in Ottawa, team members debriefed on their recent WorldSkills experience, engaged with Members of Parliament from all parties, attended Question Period while on Parliament Hill, and met with Minister of Employment, Workplace Development and Labour, the Hon. Patty Hajdu.

“The skilled trades are a promising and rewarding career for young Canadians, said Minister Hajdu. “Skilled tradespeople impact every aspect of our lives from the houses in which we live, to the cars we drive, to keeping us safe. We need more people to consider careers in the skilled trades to continue strengthening the middle class and growing the economy.”

Today, the WorldSkills Team Canada 2017 delegation is participating in Youth + Jobs = Better Future, a National Conference on Youth Employment in the Skilled Trades, hosted by the Canadian Apprenticeship Forum (CAF) at the Marriott Hotel in Ottawa. Team Canada is acting as ambassadors amongst the attending high school students with the aim of sharing their stories of success and to impress upon them the opportunities that exist in the skilled trades and technology fields.

The NSTTW program in Ottawa is one of the many sets of activities taking place throughout the country which are organized by Skills / Compétences Canada and its provincials and territorial member organizations. The aim of NSTTW is to create awareness for students and educators of the incredible career opportunities available in skilled trades and technologies across Canada.

The WorldSkills Competition, held every two years, is the largest vocational, education and skills excellence event in the world that truly reflects global industry standards. WorldSkills Abu Dhabi 2017 took place October 15 – 18, at the Abu Dhabi National Exhibition Centre, in United Arab Emirates and recorded over 100,000 visitors. WorldSkills Abu Dhabi 2017 was the largest event in the 67-year history of WorldSkills with approximately 1,300 competitors from 59 Member countries and regions from around the globe. This represents Canada’s 14th participation in a WorldSkills Competition.